Kincey Green Burdett was born at the Medical College of Virginia in Richmond, VA, on Halloween, October 31st, 1942. 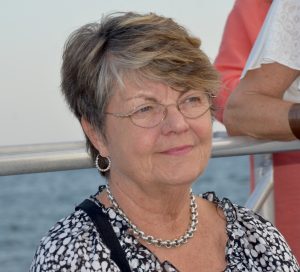 She lost her 10-year battle with metastatic breast cancer and died peacefully at home in Annapolis, MD, at 11 PM, September 14th, 2018. In between, she had a full, even exciting and inspiring life.

On the occasion of her death there has been an extraordinary outpouring of tributes to her activities and accomplishments in environmental activism for the restoration of the Chesapeake Bay. These have been rewarding for all of us who have known and worked with Kincey over the past 15 years, but they don’t address what she was doing the first 60 years of her life. I hope these few pages will fill in some of the gaps.

There are several distinct chapters in Kincey’s life:

If you want an easy version of the above, here’s how Kincey described her multiple careers in 2004:

After graduating from William and Mary as a Phi Beta Kappa with a AB in Government, I went on to get a fascinating Masters in Politics from the Eagleton Institute at Rutgers, where a small graduate class of a dozen or so candidates studied with Don Herzberg, who thought that political parties were America’s great contribution to politics. I went into government service as an Intern in a specially accelerated program in 1965, “retiring” eight years later (for the first time) as the GS-14 head of the 700-employee “Emergency Employment Program” for the District of Columbia Government.
After an eight-year break to go sailing in the Eastern Caribbean (three years), and working for the Government of the US Virgin Islands (five years), we moved to New York City where I got a job with American Management Systems for about 20 years. I had moved into free-lance consulting on the design of large computer systems for the financial services industry when Osama bin Laden and his henchmen persuaded me to retire the second time by driving their plane into the building where I was working  at the time (World Trade Center, Tower #2).

I’m a sailor and a birder. In part because of my appreciation for the natural world from these hobbies, and my own observations of the serious deterioration in coastal natural resource systems, I have become an ardent conservationist, starting with support for the [South River] watershed that we now live in in Annapolis. In 2004, I became president of the South River Federation, not long after the Federation hired a full-time Riverkeeper to help monitor and advocate for the restoration of the river and the Chesapeake Bay.

This is the Kincey.org website. For each of these Chapters, we are asking and encouraging people who knew or worked with Kincey during the various periods. to add “Comments” — information, insights and experiences appropriate to that period in Kincey’s life.

In the interim, in Chapter Five, “Retirement,” we offer several links to recent articles about Kincey.

The link for the website that Kincey built in the mid-2000’s  is <Kincey.com> —  it will be updated and linked to this site.