In June of 1965, Kincey graduated from Rutgers University with a Master of Arts degree from the Eagleton Institute of Politics. There were several virtues of this program, beginning with the fact that it was a full MA in nine months, and it was led at the time by the original director, Don Herzberg, who was a strong advocate of the unique role of political parties in the development and protection of American democracy. And the Eagleton Institute had a cocktail party every Friday, with invited state and national political leaders as guests.

After graduation, based on her undergraduate and graduate record, Kincey received an invitation to join a new Federal Management Intern program that hired candidates at the GS-9 level, with an implicit step up to GS-11 at the end of the first year of satisfactory employment. Because she took off for four weeks to visit Bruce in Chile, by the time she got back to the States in August, 1965, the only opening in the intern program was in the Social Security Administration press office. Within months Kincey had engineered moves from Security Boulevard (Baltimore) Headquarters of SSA to the DC Office in the main Department of Health, Education and Welfare building, to a detail assignment helping the new “Model Cities Program” (one of LBJ’s “Great Society” projects) press office in the Department of Housing and Urban Development (HUD).

In the midst of these crucial early career moves, in 1966, only five-weeks after Bruce’s return from his service as a Peace Corp Volunteer in Santiago, Chile, Kincey Green Burdett and Bruce Potter were married in Wren Chapel on the campus of the College of William and Mary by Jim Truxell, another Flat Hat staffer, who had graduated in the class of 1963, and who was beginning a career as a minister in Northern Virginia that extends to this day. Click here for a copy of the  Kincey Wedding Announcement .

Oh, and the marriage lasted for over 52 years, too. 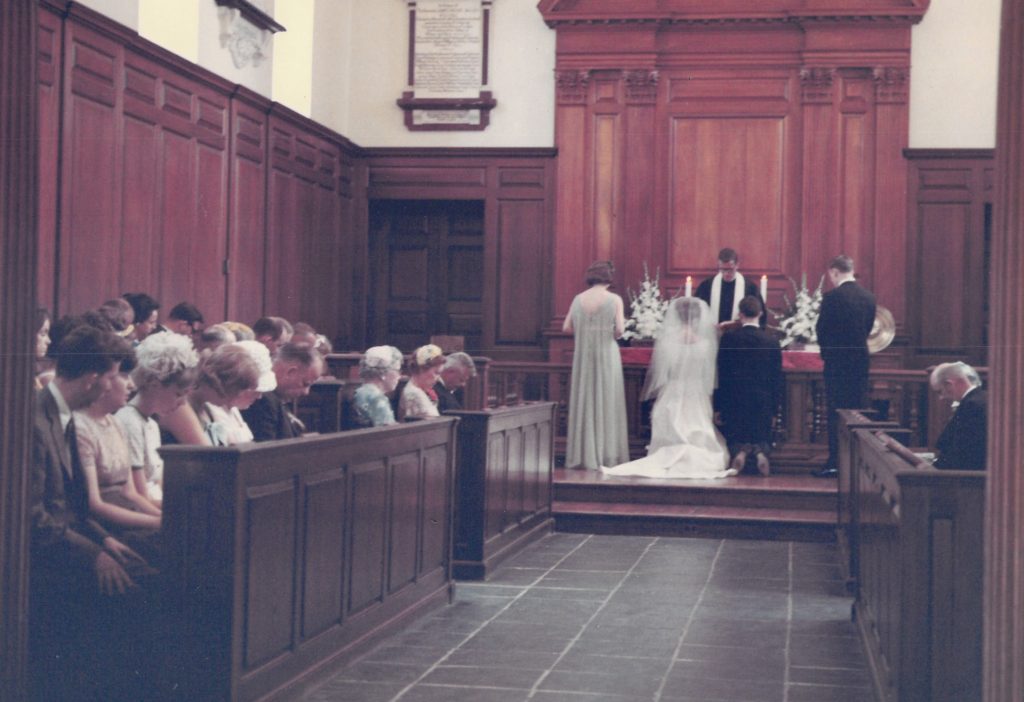 Kincey’s move into the Model Cities program was a perfect match for Kincey’s dynamic work ethic and a management team assembled by former housing developer Ralph Taylor and a number of talented social scientists who came to HUD from the experimental “Gray Areas” urban revitalization projects funded by the Ford Foundation.

Her immediate boss was Syd Kasper, a savvy government Public Information Officer who was willing to share and give Kincey all the support she needed, especially since the program had to roll out 75 city announcements for each of the next two years. She had excellent working relations with most of the staff, and especially Assistant Secretary Ralph Taylor.

A year after the initiation phase of Model Cities concluded, and after having built a broad network of contacts with journalists across the county, and with city and federal officials, Kincey switched into the operations side of Model Cities and became Desk Officer for Region 3 (Mid-Atlantic) and Region 10 (Pacific NW). Less than a year after she started on the desk, she got two cities eliminated from the 150 cities in the national program (Atlantic City, NJ, and Bradford, PA—both cities were in the districts of Democratic Congressmen, but thanks again to luck and preparation by Kincey, there was little or no public opposition to the amputation). No other city was ever dropped from Model Cities. 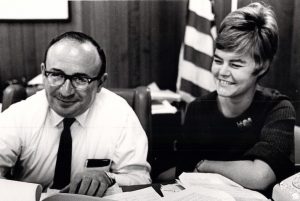 Throughout the period she had been with Model Cities, Kincey had performed well in publicly recognized roles, and was frequently assigned portfolios that were one or two grade levels above her actual GS rating. This combination, plus the rapid growth of the federal workforce in the 1960’s and ’70’s meant that jobs were constantly opening up, and Kincey’s peers and superiors were well disposed to nominate her for openings that became available.

Late in 1969, Kincey received a GS-14 rating, which was the highest grade we ever heard of (then or since) for a 27-year-old in the regular civil service.

The Murder of Kincey’s Mother

Kincey’s parents continued to live in Richmond, but as a regional service supervisor of scores of local offices in a district that stretched from Virginia to Texas, Frank Burdett spent three weeks out of four traveling. One day in the summer of 1969, Kincey received a call from the police in Richmond, saying that her mother had been found dead in the house in Chesterfield County.

It developed that Kincey’s mother had been attacked in her kitchen and was badly beaten and strangled to death. As far as anyone knew, Mrs. Burdett had regularly been drinking heavily and used taxis for minimal travel to the grocery store and her local bootlegger.  Other than that, she had so little social interaction that there were few likely witnesses or people of interest. The murder was discovered when a nearby neighbor noted that a floor lamp near the kitchen window was lit day and night, and on inspection, it was seen to be tipped over (from some sort of struggle, as it turns out). Frank had been in south Florida, working with PB offices there. Other than checking on Frank’s alibi and verifying that he really was there, we never heard that the police had investigated any other suspect, and to this day the crime is unsolved.

By 1971, Kincey was no longer deeply engaged in activities in the Model Cities program both because much of the work had become routinized, and because the Nixon Administration commitment to urban renewal was less enthusiastic than the previous era. By a recommendation from one of her Eagleton Institute classmates, Kincey interviewed with the Budget Director of the District of Columbia, Comer Coppie, for a job starting and heading up the DC “Emergency Employment Program.” After the interview, she admitted to being intrigued by the challenges of the job, which would involve setting up an employment program in public sector agencies for entry level jobs for low-income residents of the District. But it made no sense for Coppie to name a young white woman to head such a visible, politically fraught program. This would be a special problem for Coppie who had already been the subject of grousing by long time residents who didn’t think Coppie (who was a superb budget technician) was very sympathetic to local issues and traditions.

Within a week of her interview, Coppie called Kincey and told her she had the job. She was still hesitant, but took a day to think about it, and accepted. In 1973, 18 months after she started, the DC Emergency Employment program had employed over 700 employee/trainees, working with something like 32 agencies of the city government, and there was a functional process for transitioning from the temporary EEP assignments to permanent employment. A national evaluation by the US Department of Labor called the DC program a “model for the nation.”

[A comment from Diane Brockett, a fast friend of Kincey’s from the latter 1960’s when Diane and her husband Warren Howard (a sportswriter for the Washington Star) lived next to Kincey and Bruce in the 600 block of C Street NE, in Washington. Diane’s note was written right after the Kincey Celebration Cruise on October 21st (2018). bruce ]

An appreciation for KINCEY POTTER from Diane Brockett —

Kincey Potter was my best Washington friend for nearly 50 years. We met when we moved into next-door Capitol Hill homes back then. [That’s why I think this is a comment for the Second Chapter of Kincey’s interesting and challenging life.]

I’m sure others in this group feel the same.

But Kincey was (and, I feel still is) my best friend. My memory is filled with thoughts about all that we shared and all that I learned from her. In this past year, we both were facing health problems. In addition I do not drive so we didn’t see each other often, but we often exchanged lengthy conversations by phone. Towards the end, she was frustrated spending so much time at home, finding even reading difficult. But no surprise, she and Bruce headed to the West coast for two more weeks of sailing.

My husband, Warren and I explored foreign areas by boat, and appreciated their conversations and exploration of where we traveled together. They never were quick travelers. And they made new friends wherever they landed, friends who always welcomed them on second and third visits.

When the Potters gave up sailing and working in the Caribbean, Kincey started work at American Management Systems (AMS) in Virginia. There, she was sent into firms where AMS had contracts, tackling business problems after other AMS workers had failed.

Then she followed a former boss to work in New York City, and was in the second tower when it came down on 9/11. She escaped by running down the longstairs, and then by a commercial boat headed for New Jersey.

Immediately heading back home, in Annapolis she took time to get back to a good life.
Kincey became involved in local politics and the environment. She and Bruce were well practiced on environmental issues, and their Chesapeake neighborhood became well-known for making their area a sought after place to live.

Then several years ago cancer, which she suffered earlier in life, returned. First it meant a shot every 3 days. As time passed, treatments increased. Finally, her doctors said there was nothing else to try.

Not being a driver, I didn’t see much of her during the final weeks. But she and I talked on the phone. Finally, friends offered a ride to the Potters’ home. Kincey said “hello”, but I sensed she hadn’t really recognized me.

I’m thankful for being here today, and participating in Kincey’s last boat ride, if only in spirit, as well as much of her full life. And I always will be thankful she was an important part of mine.

Kincey and I were roomates at the Eagleton Program at Rutgers and later in Washington, D.C. Kincey was bright, always interesting and energetic. We continued to keep in touch across the continent after I left Washington in 1966, and visited each other a number of times. Thanks for creating this site Bruce.
Linda