In 1971, Kincey had joined Bruce in Barbados, at the conclusion of his last business trip as the Program and Training Officer of the Latin American Region of the Peace Corps. Wandering through Bridgetown, they happened to notice a couple in a rugged looking little ~35′ sailboat tied up in the Careenage. They struck up a conversation, and long-story-short, the couple was from British Columbia; they had sold their house, bought a boat in Gibraltar; and moved themselves and their three teenage kids onto the boat for a year or two of cruising. After a year in the Mediterranean, the Canadians decided to see the Caribbean where they had arrived a couple weeks before we met them in Barbados.. Once their cruising was over, they planned to either sail back to Canada or sell the boat and fly back. Thus was born the seed of three years cruising and eventually eight years residence in the Caribbean for Kincey and Bruce. 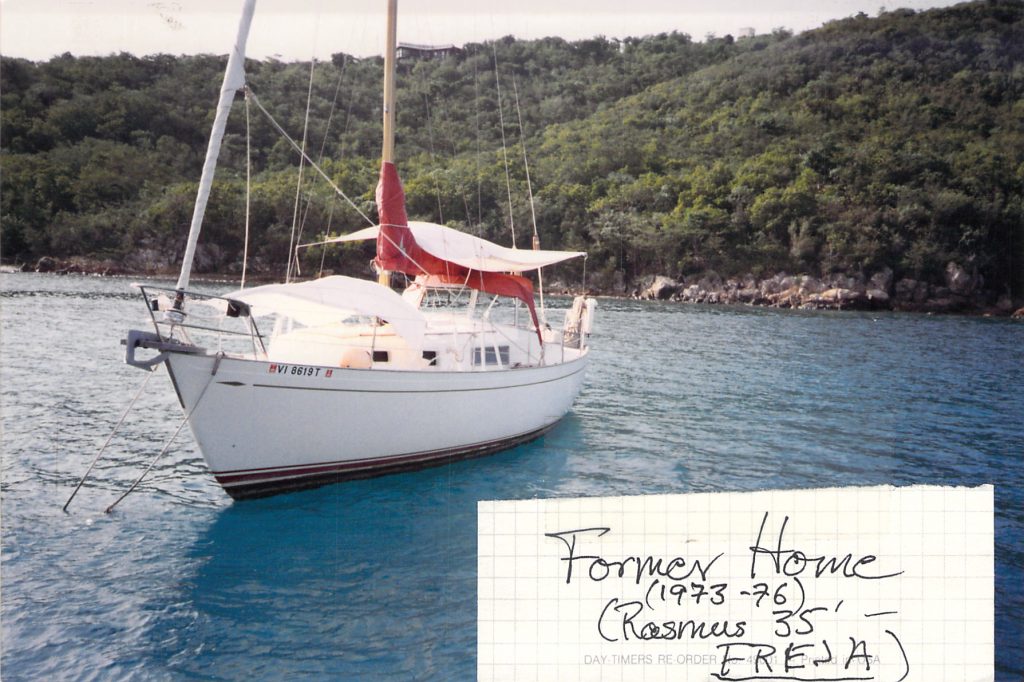 So in the spring of 1973, we sold the house at 622 C Street NE, DC; bought a sailboat model called a Rasmus 35, made by the Swedish boatbuilder Halberg-Rassey from the Monroe B. Hall Yacht Associates in Annapolis; moved aboard on April 15th; had the still unnamed boat fitted out by itinerant Annapolis-based boat mechanics Robbie and Carl, while tied up on the docks where the Chesapeake Bay Program now has its office on Spa Creek; and sailed off down the Bay in mid-May. Down the IntraCoastal Waterway to Morehead City, NC, out into the Gulf Stream, heading toward Bermuda for several days, then turn right and about June 30th, 13 days after leaving North Carolina, tie up in the big marina at Isleta — a hi-rise covered cay — just off the NE coast of Puerto Rico, near Fajardo.

Dinghied ashore, met Kevin Gray, the 19-year-old Bermudan captain of the Governor of Puerto Rico’s 52′ Bertram yacht, and we were off — on a series of wonderful experiences throughout the Eastern Caribbean for most of the next three years. Here’s the Christmas letter we sent out 18 months later. 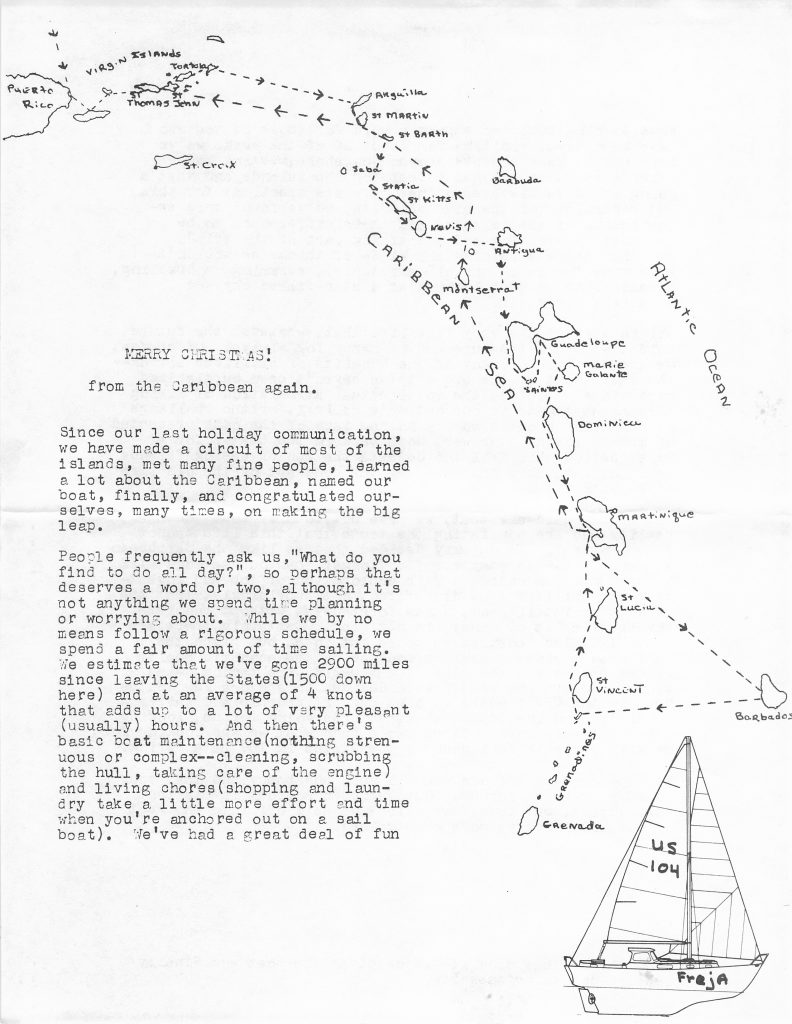 And here’s one of our very favorite places in 1975 — which was totally destroyed in the twin hurricanes of 2017, Stanley Hodge’s Welcome Bar in Cane Garden Bay, Tortola. . . 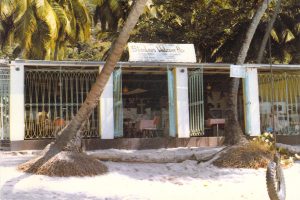 Settling in for the Long Haul

After we had been sailing in the Caribbean for three years (1973-1975) we decided to stay in the US Virgin Islands for a while. Kincey (and I, also) became an Emergency Employment employee of the Government of the United States Virgin Islands (earning about $12,000 a year — she enjoyed the irony of going from running EEP in DC to being paid by EEP). For a few months we anchored out in Honeymoon Bay on Water Island in the center of St. Thomas Harbor, where we became great friends of Phyllis and KC Jones (formerly of Cleveland and Washington, DC). As the water got colder in the fall, (making bathing in the sea less inviting at 6:30 AM every day) we lucked out with a rental apartment at Smith’s Fancy, a former small bar and hotel site just above the center of Charlotte Amalie (next door to the Synagogue). The apartment had one of the best views in the island, across St. Thomas Harbor to the West Indian Company docks where the cruise ships tied up every morning.

After a year working with the USVI Planning Department (which had great Friday lunch hours, since every week the meal was prepared by one of two expert cooks who had other jobs in the office), Kincey got a special assignment at the Department of Social Welfare (DSW) to coordinate their computer systems (in spite of having NO computer experience at all — she sought the job to develop expertise in computer system applications management).

Fortuitously for Kincey’s secondary goal in taking the DSW job, the Department became a pilot site (as a state government surrogate) for the development and implementation of a new Federally-sponsored database system to track and report on the payment of Child Support payments by ex-parents (fathers, of course) of children receiving Federal Aid for Dependent Children (AfDC) benefits. With virtually no other assistance other than the system developer, Kincey designed the system testing and quality control procedures which the system developer — a continental firm contracted by the US Department of Health, Education and Welfare (as HHS was known before 1979) — had to comply with. The Virgin Islands became the second state in the USA (after Arizona, where the system was originally developed) to have a fully functional state “Child Support Enforcement” computer system.

As we approached five years living ashore in the Virgin Islands — and our later 30s in age — we saw no realistic possibility of getting jobs or running some sort of local business that was likely to get us a decent retirement fund, even without kids. Local salaries were just too low. In the spring of 1980, Kincey made a tour of several cities on the US East Coast, but didn’t see or learn about anything that seemed especially interesting. Later that summer I had to go to Washington DC for some minor business and learned from a former Peace Corps staff colleague of a job possibility with Mobil Oil (before they merged with Exxon) in New York City. I went up to New York and interviewed for the job on the political risk team of the Planning Department of the Exploration and Producing Division of the corporation. It came thru, and we moved to New York, where we lived at the corner of 53rd Street and Second Avenue for almost exactly five years. 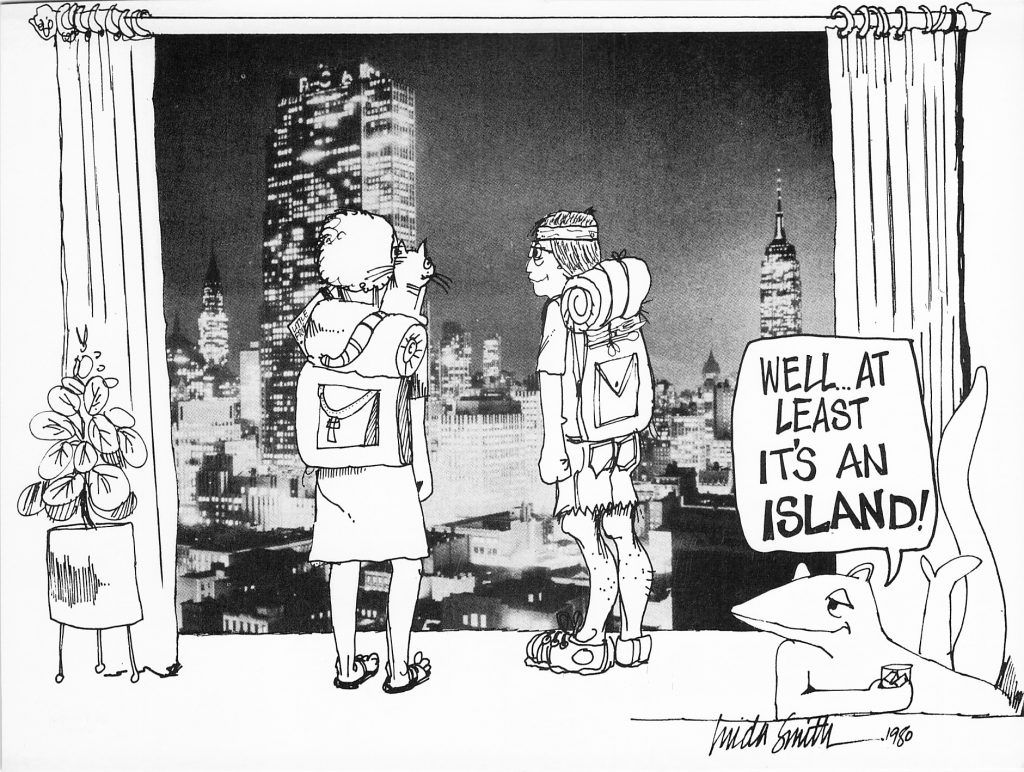 Cover of Invitation produced by Linda Smith and our dear friend, the late Judy Pitzl of St. Thomas Graphics, for our Farewell Party in St. Thomas, September 1980..

Coincident with the twists and changes going on in life choices for Kincey, her father was sinking deeper into alcoholic depression living alone on his sailboat, the Kincey Gee (purposefully ambiguous whether it was named for Kincey his late wife, or Kincey his daughter), in Dania, Florida. In the spring of 1980, Kincey sacrificed a 10-day sailing vacation in the Bay Islands of Honduras to spend time with her Dad, hoping to see some way to get him to accept help to get out of the abyss that he seemed headed for. She said later that she felt when she left him that she had not been successful.

September 14th the Dania police received a report about Frank that someone in the marina called in. They found him taping a hose from the tail pipe of his car to the back window of the car. They talked to him and tried to arrange some sort of consultation for him with health offices, but they had no information about Kincey or how to contact her, and Frank certainly didn’t offer the information. A week later, Frank successfully committed suicide. Kincey never really talked about his death; there was no point; it was a page to be turned.

My late husband, Ed Towle, and I first met Kincey and Bruce in the 1970s, when we four found ourselves — perhaps to our mutual amazement — living and working on a small Caribbean island. We remained friends ever after, while Bruce, Ed and I eventually worked together at Island Resources Foundation, an environmental NGO focused on the insular Caribbean. Our IRF collaboration began in St. Thomas in the 1970s, and continued on and off until the late 1990s when, upon Ed’s retirement, Bruce assumed IRF’s presidency, a position he would hold until the foundation’s sunsetting two years ago.
As I put my thoughts together to write to Bruce following Kincey’s death, I found myself reflecting on two pieces of Kincey’s life that produced an even closer intertwining of our four lives. In the first place, while Bruce, Ed and I built careers that concentrated on the environmental concerns of small, tropical islands, Kincey’s professional life was for many years removed from this arena. And then, about a decade and a half ago, that changed. Kincey left all that success behind to build a new pathway of leadership in Annapolis on behalf of a healthier and more sustainable environment.
And so, I reflected, it was in these last years that the Potters BOTH emerged as outstanding leaders for a common cause — the environment — focused it is true on different geographical areas but certainly with like-minded goals. It was a perfect merging of their avocations, a capstone to their remarkable 50+ year partnership.
Secondly, I doubt that many knew how essential Kincey was to the longevity of the organization to which Bruce devoted a substantial portion of his professional life. Island Resources Foundation was an NGO which would, like many non-profits, experience inevitable ups and downs during the four-decades of its institutional life. And so compensation packages at the Foundation were frequently meager (indeed sometimes non-existent!), and it often was the stability afforded by Kincey’s career that gave Bruce enough flexibility to continue his work in the Caribbean. It was her support that provided an underlying, solid footing that enabled him to forge a leadership role throughout the wider Caribbean. In this, she remained in the background, but I for one recognized how incredibly important her contribution was.
And so I say thank you, Kincey. You shared all the highs and lows of our work in the Caribbean, and we are very grateful.

It was my good fortune to meet Kincey and Bruce during this phase of her life. While working with Ed and Judith (and if memory serves actually under Bruce’s leadership) at IRF on St. Thomas chasing drogues (don’t ask) my first memory was going dancing with the Potters in French town on a second floor terrace of a cafe bar and imbiding in too much rum-and-tonics (while I have no memory I am sure it was Mt. Gay). While I only stayed in that position for a year or so, there was enough time to go sailing (Cane Garden Bay, BVI stands out), eating spiny lobster (Stanley’s) hosting client parties as the major domo of the IRF guest house courtesy of our friends in NOAA amply supported by the Potters.

My luck continued because we were able to stay in touch through the years into the mature professional phase. This included crashing with them in mid-town Manhattan, sailing the Chesapeake and collecting crab pots (with the keel), returning the favour by eating on numerous occasions boiled crabs on a variety of water fronts including on a beautiful Saturday afternoon just last July. Kincey and Bruce also visited Italy on one of their sojourns to Europe where I tried to return the favour sailing out of Anzio to Ponza and back again. Spirited sailing, good food, wine and fouled anchors are my memories. We also had the opportunity to explore the environs above Rome in the Castelli.

More recently I was yery impressed with Kincey’s work on the environment in the Bay. When last we met and visited some the conservation areas including the Smithsonian Environmental Research Station it was clear to me that while not trained in the field, like so many of her earlier endeavours, she had mastered the craft and earned the respect of her colleagues and counterparts. We had talked about the possibility of taking all that experience “on-the-road” to Brasil where it is much needed. The thread that runs through this brief “stream of consciousness” approach to my memories is good food, wine, sailing and most of important of all, companionship. Kincey, will be sorely missed.

I met Kincey and Bruce a few years ago. What impressed me was her dedication and perseverance on environmental matters important to the Chesapeake Bay and its tributaries. Kincey made her mark despite facing medical challenges. Despite that, she was invariably upbeat, smiled a lot and generally enjoyed life, good food and wine and overseas travel. Reading even more about her life and early career has been inspiring.